$12,794 grant funds melding of the hip and historic for Civil War geocaching trail

$12,794 grant funds melding of the hip and historic for Civil War geocaching trail

FREDERICK, MD – Marketing your strengths is important whether you are a business or a region. For many rural communities and regions throughout Maryland the real assets lie in the beauty of their landscape and the richness of their history. The Heart of the Civil War Heritage Area, one of the state’s 13 heritage areas, decided to leverage those assets to create a unique visitor experience to stimulate an interest in history while also channeling tourism dollars into the regional economy.

The heritage tourism and economic development project called the Heart of the Civil War Heritage Area Geocache Trail is funded by a $12,794 Maryland Agricultural Education and Rural Development Assistance Fund (MAERDAF) grant, which is administered by the Rural Maryland Council (RMC). The grant funded the development of 16 “treasure sites” or geocaches along a Civil War rich trail stretching through three counties: Carroll, Frederick and Washington. Participants use GPS-enabled devices to find items hidden in particular locations. Think of it as outdoor treasure hunting where the hip and historic meet.

“We have been thinking a lot about how to make history relevant to more people,” says Auni Gelles,

assistant director, Heart of the Civil War Heritage Area, and grant project coordinator. “In general, people tend to think about history around big landmark years like the 150th anniversary of the Civil War and bicentennials. Geocaching and using technology are strategies that we can use to make history relevant to visitors and locals alike all the time,” she adds.
The geocaching trail was created with dual purposes: to boost attendance at existing historical sites and to create an economic development impact in the region where they are located. The trail officially opened on October 1, 2016. “We reviewed our first set of economic data when we were at about 180,” says Gelles. “Approximately 89 percent of the people reported purchasing a meal or snack while here; 71 percent bought gasoline and 8 percent spent a night in a hotel. We expect the numbers to continue to support that this project is having an economic impact in the region,” she adds.

Creating impact to a region and collaborating with partners were two aspects that made this project particularly attractive to the funder. “This project impacts five Main Street communities in three counties,” says Charlotte Davis, executive director of the Rural Maryland Council. “It’s continued economic development effects through visitor spending in Westminster, Taneytown, Mt. Airy, Frederick and Middletown is an important side benefit of a clever history education project. It has been great to see organizations like the Maryland Geocaching Society as well as the multiple historic sites and county tourism offices come together to develop this project,” she adds.

For the Heart of the Civil War Heritage Area the real magic of the project has been its success in igniting new interest in history not only for visitors, but also for locals as well. “Participants are encouraged to leave comments when they turn in their Geocaching Passports to receive their geocoin rewards when they complete the trail. We not only have heard from visitors, some who have traveled from other states, but also from locals who have spent years driving past historic sites and for the first time stopped to do the geocache trail,” says Gelles.
One of 13 designated heritage areas in Maryland, the Heart of the Civil War Heritage Area serves three counties and 24 municipalities. It’s mission is to promote the stewardship of its historic, cultural, and natural Civil War resources; encourage superior visitor experiences; and stimulate tourism, economic prosperity, and educational development, thereby improving the quality of life in our community for the benefit of both residents and visitors. For more information on the Geocaching Trail, contact (301) 600-4031, visit       www.heartofthecivilwar.org/geo-trail or email info@heartofthecivilwar.org

Founded in 1994, the Rural Maryland Council serves as the state’s federally designated rural development council and functions as a voice for rural Maryland, advocating for and helping rural communities and businesses across the state to flourish and to gain equity to its suburban and urban counterparts.  To learn more call (410) 841-5774, email rmc.mda@maryland.gov or connect with the Rural Maryland Council at facebook.com/RuralMaryland or on Twitter @RuralMaryland. 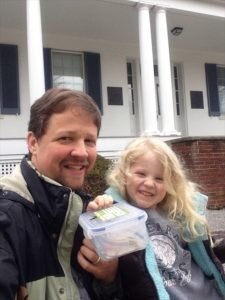 Geocache user “Pathfinder Mark” and his daughter after finding a geocache at Emerald Hill Park in Carroll County. 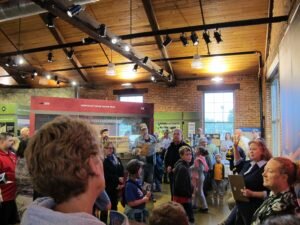 More than 100 “cachers” attended the official launch of the Heart of the Civil War GeoTrail at the Frederick Visitor Center on October 1, 2016.